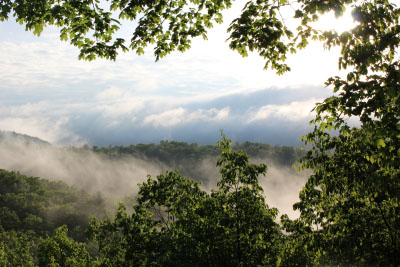 River Ridge was purchased by Allegheny Properties, Inc., from the University of Cincinnati School of Medicine. Paul Shade had been employed by the University to oversee the property. The land was posted with NO HUNTING/NO TRESPASSING signs and the cable gates were installed. Thus it became a Wildlife Refuge.

River Ridge contains about 1,200 acres, having within its boundaries tracts of land acquired from different families. Some two hundred thirty-nine of these acres were conveyed to the University of Cincinnati by Dr. James J. Whisman. Until his illness made it necessary to move to Washington, D.C., where he died. Dr. Whisman lived in a house that was located on Lot A6b.

The house was razed several years ago and a new house was built by a Mr. Spring, who owned the property at that time and lived there with his family.

The Whisman (Spring) property was recorded as the “Second Tract” lying at the foot of Sidling Hill Mountain, being deeded to Dr. Whisman from Wayne D. and Adele Reed, and to the Reeds from Adam Spring. The name of Whisman does not appear in the phone books of Berkeley Springs, Paw Paw, or Romney. He was an older man who came out to the house on occasional visits to the country.

Land surveys of years ago were not always accurate as to the actual acreage, because homesteads were handed over through the families for generations. Memories dimmed, markers fell over, and lines blurred. Most corners were marked by a tree, a blaze on a tree, a fence corner, large boulders or just a pile of stones, and were recorded as the number of acres “more or less.” Resurveying was done if a dispute arose, or the land was sold outside of the family.

Later, iron, pipe-like stakes with a nail through the stopper in the top end, were driven in on the corners. These are still in place in many areas, but are difficult to locate without proper measurements and equipment.
Around River Ridge you will find so called “concrete monuments” with pertinent information stamped on a metal disk on the top. One such monument is located just to the right of the lower gate on the way out. They were set in place in 1970 when the survey was done for the University of Cincinnati.

Today, River Ridge is a community of more than 150 property owners with a strong Home Owners Association that seeks to serve the natural, pristine beauty of the area.